There was a Girl who sometimes lost herself in a time-warp.
There was a Boy whose heart was full, but whose morose anger at times, replaced thoughts of love.
Life conspired to keep them apart, with time spent doing things they didn’t want to be doing, with people they didnt want to be with. Tumultuous and snide was Life in her mission and with whispering murmurs and meandering episodes, sometimes lured the Boy away from the Girl, or gave not the chance for the Girl to be aware of the Boy’s need to share his cares, until, in darkness, they drifted silently apart, unaware of the unravelling satin ribbon thinning and straining between them.

Such a nasty thing.

Life and Time. These two can do so much damage.

Something left unsaid, until it is too late.

Something left undone, until the echo of its loss decays and rots.

Then, sometimes… but only sometimes, an island of stillness spoils the abyss. Like a drop of liquid light dripping into an inky puddle – its spiralling traces swirling and twirling round and round. Creating vibrations. Creating consequences. Creating change.

Such was yesterday evening.

A moment of pure tranquillity and relaxation in a life full of tribulations and panicked errands.

Just a Girl. Just a Boy.

And a quite restaurant with very tasty food and a glass of red red wine. 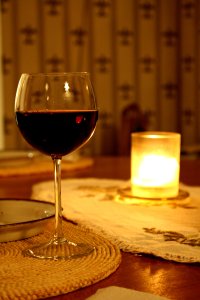 The service was slow at first, just like the conversation perhaps. Not lagging, not forced, just lackadaisically gradual and sibilantly dreamy… maybe that’s why when it started to be smoother and gently fluid, it was also so sensuously succulent. 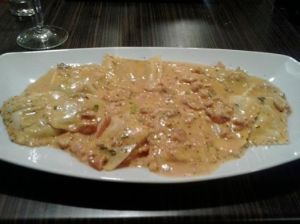 The delicious focaccia with mozzarella di bufala, crispy and just right as a shared starter. Penne with salmon and cream for her and T Bone steak for him. The portions generous and savoury. The two totally in synch. 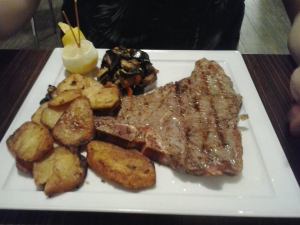 And then later, there was no need for desert… not at the restaurant anyways :0)