I am so fed up of people expressing shock and despair whenever I say this. Most of my friends and acquaintances, not to mention work colleagues, seem to believe that because I love to read, to write and have a sarcastic turn of mind (not to mention a weird morbid kind of humor), I simply MUST be the kind of person who enjoys British Comedy. Now, excuse me, but where on earth does this assumption come from?

To be clear, I am not talking about current British comedy serieses like ‘Millie Inbetween’, ‘Stella’, or ‘Miranda’ which serve piping hot jokes relevant to today’s world, but about those 60/70s comedies which, through an assiduous cult following, are still alive, even though, personally I think that their skeleton should have been dead and buried with the beginning of the new century.

Mud splatters like ‘Porridge’ and ‘The Young Ones’ just don’t do it for me. In fact they irritate the hell out of my day!

I tried watching ‘Fawlty Towers’ and it was ok… in small doses. But I am really grateful that I won’t have to watch it again.

I like ‘Black Adder’, but I just can’t stand ‘Monty Python’… the jokes are too childish and they just sound like stupid adolescent boys trying to impress each other to me.

Recently I’ve started watching ‘One Foot in the Grave’ and surprisingly, I’m enjoying it. I simply loved ‘The Vicar of Dibley’ too. The point is, both sitcoms were produced and aired in the 90s and 2000s, and so, although not being ‘current’ they at least can be said to have a modicum of ‘smart satire’ instead of throwing racial jokes around whenever the author looses any hope of finding a suitable punchline. Another thing is that, like ‘Black Adder’, they are dark comedies, and so all the more relevant to today’s world (unfortunately… depends on how you take it). 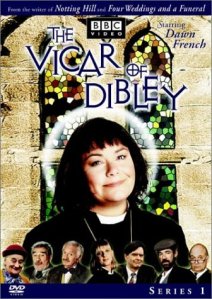 Anyways, I’m more than sure that after reading this, some people would just love to grab their torches and pitchforks and come after me with all they have. I don’t expect everyone to feel as I do, and as long as you enjoy them, good luck to you. I just find them totally silly, not to mention that they bore me to tears. Sorry ;p