Yesterday’s recipe was a real success. Instead of carrots, which I didn’t have after all, I used mushrooms. And instead of oregano, I sprinkled loads of rosemary, sage and thyme, and it was all delicious.

Here’s a pic of the dish before I put in the potatoes, and after. 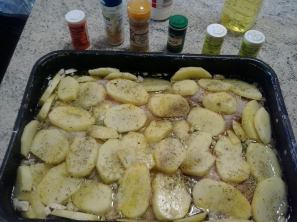 And a photo of what it actually looked like after it came out of the over (and before we started to dig in!)