Would Maltese food taste as good, if we didn’t add herbs to it? Many Maltese recipes would lose their special taste if we left out certain key herbs and spices. Rosemary (klin in Maltese), a herb which is native to our shores, is one of these. Being indigenous and pertaining to the mint family, this herb tends to grow on rocky outcrops and valley sides. Its habitat and also growth is similar to that of wild thyme, and these plants are often found growing side by side on our cliffs. It does not need a lot of water and grows well even when left to fend for itself.

Rosemary is a very useful herb. Often called names such as ‘Dew of the Sea’, or ‘Old Man’, it was mostly well-known in folk medicine for boosting memory and improving one’s mood. A study conducted in 2016 by Northumbria University aimed at proving how the scent of rosemary oil could titillate cognitive emotions and researchers in fact found that a percentage of the test subjects exposed to the aroma of rosemary oil could in fact, perform better in feats of memory. It is no wonder that in ancient Greece, students would wear rosemary garlands during their exams!

This perennial evergreen plant has needle-like leaves and small purple, white or blue flowers. Apart from being used as a fragrant essential oil, it is also frequently burnt as an incense and used in cleaning and beauty products. Extracts from its flowers and leaves are also used to treat a variety of disorders, since it contains antibacterial and antioxidant rosmarinic acid. Its oil extracts also contain anti-inflammatory, anti-fungal, and antiseptic properties. Rosemary contains a significant amounts of Vitamin A, which is mostly renowned for providing vision protection, healthy skin and mucus membranes, as well as containing Vitamin C, which synthesizes collagen, the protein required for optimal blood vessels, organs, skin, and bones. It also contains manganese, iron, potassium, fibre and copper, among other beneficial properties. 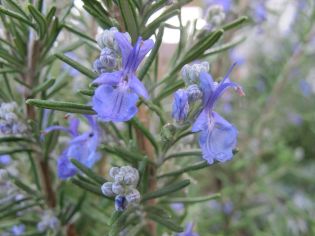 It is worthwhile to note that when dried, rosemary is more concentrated. Fresh rosemary on the other hand, can be used to make flavored olive oil, as well as for a number of tasty recipes. A good idea would be to mix fresh rosemary with softened butter or Greek yoghurt to create a delicious sandwich spread. Some well-known traditional Maltese recipes which use rosemary as one of the main ingredients include rabbit in gravy with rosemary and bay leaves, lamb stew, lamb rack with rosemary sauce, and poultry marinated in rosemary and olive oil. Another succulent dish consists of fresh lampuki, or any other kind of fish, baked after being marinated in lemon juice and rosemary.

Rosemary, both fresh and dried, can be bought from any farmer, spice shop, or apothecary in Malta and Gozo, however if you prefer to grow your own, rosemary plant care is pretty easy. It is better to start the new plant off from another plant’s cutting, rather than the seeds. Rosemary needs well-drained, sandy soil and at least six to eight daily hours of sunlight. Rosemary plants prefer to be dry, so be careful not to water them too much.

This article was written by me and originally published on http://livinginmalta.com/miscellaneuos/maltese-herbs-rosemary/

3 comments on “Herbs for Cooking and Healing – Rosemary!”