My first personal meeting with American artist Susan Waitt occurred some years ago at a private spiritually-themed event and reception, taking place in a certain ex-bordello in Valletta. Her colourful, vibrant outlook and curiosity immediately struck a chord. A Scorpio, the Connecticut-born artist worked as an illustrator for a Disney studio in Massachusetts, hosted her own American TV talk show and was an artistic director and writer for Liquorish TV, to name but a few of her achievements.

On the other hand, her gothic, surreal artwork seems to spell quite a different character; more dark, more mysterious, but still very intriguing. Waitt’s perception seems to filter and reproduce vagrant metaphysical ideas of succubi and the supernatural; sinister presences which may as well hide within each and every one of us, or even behind the closed door around the corner.

What prompted you to come to live in Malta?

Originally, I came here to co-organise an international conference on the consciousness of the Megalithic Temple builders, and somehow, I never left. I’ve lived in Malta for nine years.

From Disney artwork to the grotesque: How did one category of art evolve into the other?

The concept of the grotesque in art and literature speaks to something profoundly basic about human nature, and the nature of existence itself. In fact, Disney perfected for a general audience the interplay of paradoxical opposites such as fear and laughter, aggression and playfulness, and the merging of bizarre, carnivalesque atmospheres with rational and logical realities. Think of all the terrifying moments in Bambi, Peter Pan, and Snow White to name just a few animated feature films. My art evolved from this quite naturally, in that I felt like it was part of the whole circle of life, since the spectrum of experience was all there in Disney already.

Of course, I was always drawn to Bosch, Goya, Fuseli, Moreau, Dali and many other artists who portrayed what was dark, subterranean and wrapped in ineffable mystery. Now, having grown older and somewhat wearier of the world, it often appears to me that there are also precious gifts within the darkness of the human mind – depth, profundity, nuance and complexity. Intense contrasts of light and dark add a sense of drama and therefore a sense of awe. Awe is a key aspect of the experience of the sublime. 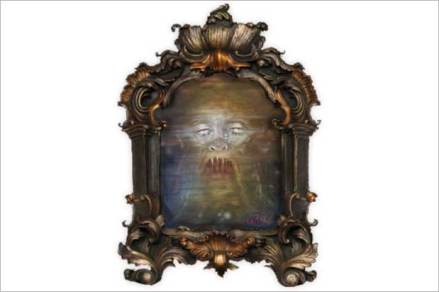 Is there a particular unifying theme within the exhibition?

I deliberately used Victorian Spiritualism and mediumistic séances together as a unifying trope or motif, because I felt it represented the collective desire of humanity to probe the unspeakable enigma at the centre of existence.

What is your method of creation?

For many years I painted in acrylics only, especially for large-scale mural projects. Now with my studio work, I usually first execute an unfinished acrylic under-painting, usually on a toned background and then finish in oils. When I was working as a commercial book illustrator for Disney and Fisher Price, I was constrained to lay out book galleys meticulously. That required sketching and sometimes re-sketching scenes and finishing with inks, water colours and airbrush. In recent years, I started executing artworks with the same absolute freedom and energy that I had usually reserved for my free-time sketching and doodling. I’m producing art directly onto the canvas now. 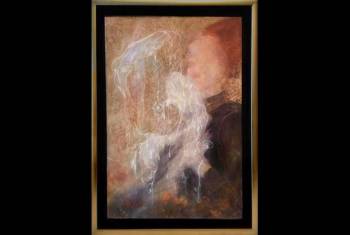 This article/interview appeared on EVE Magazine on 22.10.2016 – Please follow the link to read the rest of it: http://www.eve.com.mt/2016/10/22/susan-waitts-night-gallery-the-uncanny-the-sublime/

First let’s make this clear – this is a review of the book NOT the animated movie, although I loved the movie too (and it could still be construed as such). 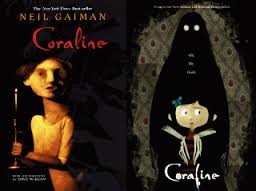 That being said, I think what touched me most about this book is that it is truly a book for children. The plot line is quite deep, the psychology behind it is disturbing and twisted, and most of the story itself is so metaphorical as to be almost frightening, and yet, it is set so as to not only enter into the world of children, but also make every child who reads it feel totally at home there. 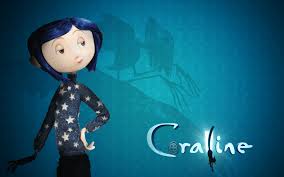 It captures everyday moments of every child’s life – the unlikeable ‘recipes’ served at dinner, the boredom of rainy days, the loneliness of children with no other brothers or sisters, the sense of loss when one’s parents seem distant and busy with their own lives, the way children’s opinions are glossed over and ignored when it comes to practical matters like choosing clothes for school. 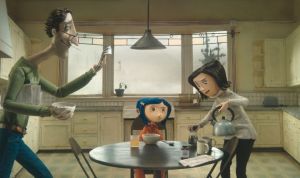 Most importantly, it offers two different perspectives of parent-hood. On the one hand, we have Coraline’s normal family – her two working parents who both work at home and have their own studies there, who sometimes have no time for Coraline and who have forgotten what it’s like to be a child, and therefore do not understand her, yet who love her and would sacrifice themselves for her. 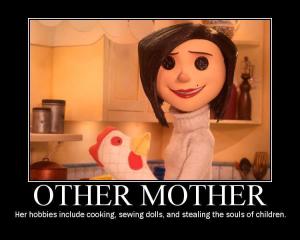 On the other – there are the Other parents – especially, the Other mother. She is a perfectly frightening representation of those clutching needy mothers, who need something to love so much, that they literally stifle their children, bottling them up in a bubble of fake smiles and repression – until finally the childrens’ individuality is squeezed into nothingness… which is what they become. 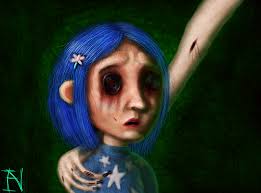 This metaphor of the needy cold mother, who selfishly does not really care about who Coraline is or what she actually wants, is the prevalent ‘monster’ in the story, and is all the more terrifying in that there are so many real monsters like her out in our world. 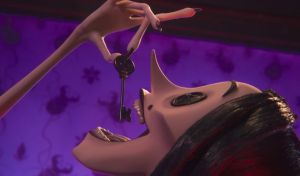 Coraline’s natural communication with the animals around her is so normally-portrayed as to be totally believable, and not relegated to the label of ‘magical’ or ‘supernatural’ at all. Cats talk, mice dance, rats can be spies – it is presented as a fact, and so it is.

This short book reminded me of the premise of ‘The Ocean at the End of the Lane’, where family issues are combatted by children through metaphorical intervention. Totally brilliant. 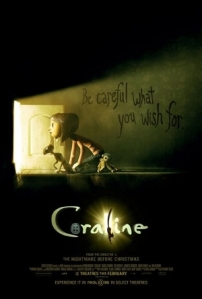 After four years, yesterday I re-watched the animated movie ‘Paprika’ (2006). This Satoshi Kon masterpiece had always remained in my mind as one of a kind in its genre (that is, anime movies), and my perception of it did not change after re-watching it. 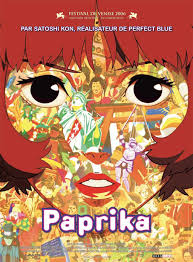 Apart from the plot-line, which is bewitching and exclusive in and of itself, the characters are wonderfully mysterious, yet with understandable motives and feelings, and, most importantly, the graphics and colors, apart from being unusual and perfect for the dream-sequences pertaining to the storyline (which, in fact, concerns dreams), are vivid, yet in a way, horrifically nightmarish. The theme of the hellish circus is captured perfectly, and wonderfully juxtaposed with the clinical and cold atmosphere of the labs. The soundtrack is also exceptional – in fact this was the first animated movie to use a VOCALOID – that is a singing voice synthesizer software. 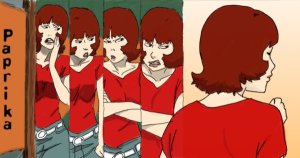 What entirely fascinated me apart from all this (yes there is MORE) was the double and split identity of Doctor Chiba, whose dream-self is the sexy, cute and pixie-like Paprika. Able to navigate through dreams, free as a bird and always smiling, she is totally different from her genius down-to-earth counterpart. This is what we hide inside us – another self – which is only free when we are asleep. 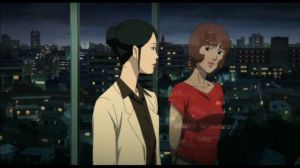 And the question comes naturally to mind – what is my dream-self like? If I had such an advantaged technological device that enabled me to control my dreams, would I also have such a different dream-self? Self, but not self? A part of me, but, as Paprika says, with me being also a part of her? Who would be the strongest between us, the conscious me, or the subconscious one?

‘Paprika’ is not a children’s anime. Not only does it have violent, sexual and very disturbing connotations, it also has a very convoluted plot. One which makes us thing and debate, frown and wonder. The term ‘fucked-up’ also comes to mind lol. 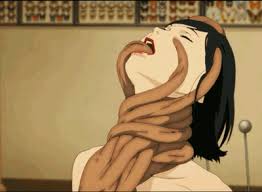 Unfortunately, its director, Satoshi Kon, died in 2010, so we will have no more of these gems coming our way. Another anime of his which I’ve been hearing for years about, and never got around to watching, is the psychological thriller ‘Perfect Blue’ (also by Satoshi Kon), which not only has an immense cult following, but is also described as being one of a kind. 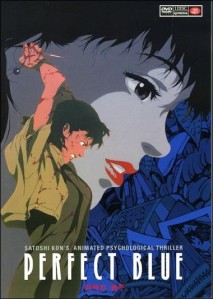 ‘Perfect Blue’ is even older than ‘Paprika’ since it was produced in 1997. Certain animes, like certain movies, are ageless.