Għana is generally sung by two or more singers called għannejja, who seat themselves at two opposite ends of the stage, retorting answers to each other in rhyme, usually without any planning or meditation. Għanneja vie with each other during this kind of singing, which involves satire and puns, often dealing with the faults of character of singers themselves, or of the characters or situations they are singing about. The singing involves musical accompaniment by one or more guitarists. The lead guitarist is called ‘il-Prim’. Between each stanza of għana, the lead guitarist plays il-prejjem, in which he or she shows their skills at guitar playing. 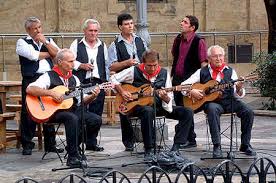 The tunes are somewhat wild and meandering, but they also involve a certain kind of romantic beauty and harmony. As the singing starts, the audience tries to follow all the words being sung closely. Clarity of expression in the performance is expected out of every għannej. Moreover, the audience also expects singing to include the correct rhyming and a theme which is maintained throughout the song.

There are various types of għana. The ‘spirtu pront’, which is the most popular type, consists of short stanzas, normally sung by a group of two or more singers. This type of folk singing takes place in the form of a duel. This generally involves two styles of singing. The first one is called ‘the hitting back’. Four singers are involved; the first singer sings with the third person, while the second singer sings with the fourth one. The second style is known as the ‘impromptu reply’, and is normally done between two singers. While the first singer starts on his first two lines, the second singer continues the rest of the stanza, creating an interlocking melody. It is normal practice for the singer who finishes the last two verses to start the next stanza. This is called ‘għana maqsuma’, or ‘għana bil-qasma’, which means broken or shared singing. The spirtu pront and the għana bil-qasma require a great deal of quick thinking as well as the ability to rhyme. Singing usually lasts for an hour and comes to an end with a ‘kadenza’, which has two or more stanzas.

Another type of għana is the għana tal-fatt. This consists of a long and elaborate narrative in verse form. It is called ‘tal-fatt’ because its theme usually deals with a particular deed, event or legend. The theme most dealt with is the lives of well-known local personalities or a sensational or tragic event. Sometimes, it also deals with a humorous topic, but the most popular theme is the gruesome details of a murder or crime.

Today, Għana singers are prestigious, since it takes skill and a considerable talent to be able to do so well. In Malta, għana and traditional folksongs are sung at festivals, fairs and tourist centers, as well as cultural events. Each June, the Malta Arts Council organizes a two-day music festival centered on Għana called the ‘Għanafest’.

To read the full article, please go to http://livinginmalta.com/entertainment/ghana/