It is a truth universally acknowledged that it is much harder for a woman to reach orgasm than it is for a man.

It’s a fact – nearly all men climax without difficulty, and yet women seem to need more attention and more effort on the part of their partner to reach the pleasure peak of the so-called Big-O. So much so in fact, that until a few decades ago, doctors even believed that it was scientifically impossible for most women to reach this sexual climax at all. In certain cultures, those who actually did were sometimes even considered to be unnatural by their husbands or partners. 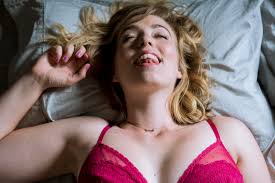 Not all of us are automatically turned on every time we’re confronted by an excited male, nor is it so easy to reach sexual gratification just because someone squeezes our booty or jumps up and down on us a couple of times. Yes, women can reach orgasm too, but no, they do not reach this sexual target as automatically and easily as men do.

Why? Because apparently while men only seem to need a visual and physical stimulus for them to reach a certain state of excitement, women also need a mental and/or emotional stimulus.

There are two types of orgasms. These are vaginal orgasms and clitoral orgasms. Sigmund Freud, the father of psycho-analysis, used to believe that older women had vaginal orgasms, while younger and more immature women had clitoral orgasms. Experts no longer believe this. However, Freud was right in thinking that there were two kinds of orgasm. This was also maintained in a study published in the Journal of Sexual Medicine in 2013, which showed how ultrasound tests revealed that the two kinds of orgasms – clitoral and vaginal – differ in blood flow and sensations produced. 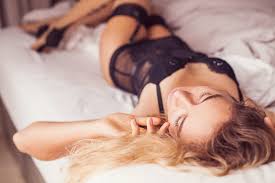 French gynaecologists Odile Buisson and Emmanuele A. Jannini tracked blood pressure and patterns as it flowed through the female body and organs, and they saw changes in blood flow during different types of stimulating contacts…

This article of mine was published on EVE.COM.MT – Please click here to read the rest! http://www.eve.com.mt/2016/11/29/the-female-orgasm-fact-vs-fiction/ 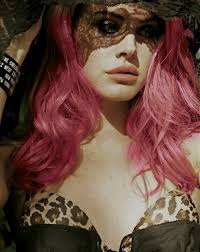 My tights are ripped, I do not care
Pink hair, tulle skirt and a daredevil flare
sumptuous breasts and a wicked smile
these are enough for a job like mine

Here they come with their slouching gait
one and all – looking for a date
someone warm, who will take them in
as long as they’ve money, it is not a sin

A girl’s got to eat, my mam used to say
For good or for ill, be it night or day
just call me, you know me, I’m always game
many hands and no faces, to me all the same

As long as you pay me, I don’t really mind
if we do it standing, from the front or behind
I’m not picky, not choosy, come on one and all
we can rent a room, or go behind the wall

A pert bottom, parted lips, with high heels and a wink
I’ll have your interest and pecker, before you can blink
Look no further, come hither, yes I am the one
‘Hey Mister, I’m Heather, let’s go have some fun!’

I wish I had a gay-guy best friend! 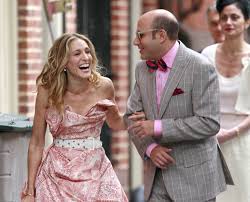 Ok, this might sound kinda weird with labeling-overtones, but really, let me explain what I mean.

Yesterday, one of my colleagues, a very extrovert, bouncy, happy-go-lucky and vociferously gay young man, who is also a local media personality, being a singer and an amateur ‘magician’, told me I have ‘nice breasts’. Now, seriously, apart from boyfriends/dates/interested males who wanted sexual favors or other stuff from me, and who appreciated my boobs, but definitely did not use the word ‘nice’ NO FEMALE friend would ever compliment another female on her boobs. Except if she was asked at point blank of course, when she would probably say ‘You have a nice figure’, but not ‘You have nice boobs’.

See, female friends are complicated that way! They try to be friendly and helpful, without being bitchy or pushy, they try to give advice without seeming to, and give compliments while trying at least to appear ‘neutral’, that is to show that the compliment is being given because they really believe it, and not because they like you and are therefore trying to be nice – which is actually most often the case anyways. Female friends walk a thin line, being always aware that the smallest gesture or comment could be classified by the other female as a pointer to envy. 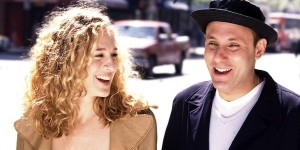 On the other hand, I have yet to encounter a male, ‘friend’ or otherwise, who is totally honest when he comments about a girl physically. A male would either mutter, flutter and then finally say it’s ‘ok’, lather on lavish compliments in order to get something out of you, twist the question into a joke, or escape the quandary altogether by telling you to ask someone else, since he:
a) is too in love with you to be objective
b) does not know about fashion or ‘things like that’
c) looks at you blankly and ask you what’s different from last time

A gay male friend on the other hand, would not only be blatantly (and sometimes cruelly) honest, but would tell you why in great detail, while giving you tips on how to improve the situation. He would not jump to conclusions, try to get out of the issue, or be afraid of ‘hurting your feelings’. He would not even think that you might think he’s envious (as most female friends do) or that you are asking merely for him to be nice. Basically, he’d have the honesty of a guy, but the interest in the subject a girl usually has. 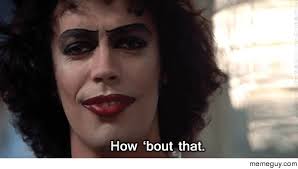 Rant apart – unfortunately I have never been so blessed as to have a gay male bestie (or GMBFF). I had a couple of gay male friends, or acquaintances, and dated a couple of guys who were bi, but it’s not the same thing. A BEST FRIEND has the impetus and knows you well enough to actually be honest and intimate with you, in a way that an acquaintance, obviously, cannot.

Am I just being too optimistic in my estimate or what? 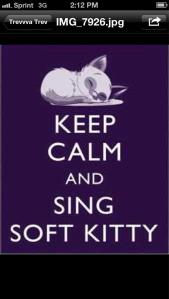 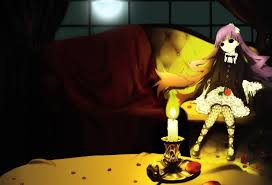 Shiki was a random find. I’ve been combing the anime market for good horrors/psychological thrillers for ages now, and wanted something good with a Japanese cultural flavor. Shiki seemed to fit the bill, even though the romaticised vampire plot-line made me a bit wary, since we’ve seen sentimentalized semi-pornographic versions of it so many times before. 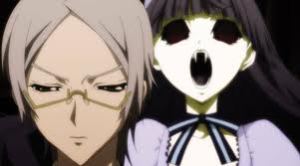 The anime itself was quite good. It sports Higurashi-like traits, in that it is set in a small, almost cut off, town in rural Japan, with its own customs and legends, where, obviously, something strange starts to happen during one hot Summer, when a large number of people start to mysteriously die off. There the story totally deviates from Higurashi however, in that, although interesting and at times, agonizingly full of emotion, the characters in this anime somehow still fail to gain that certain depth of perspective and credibility. The characters in Shiki are thin, cardboard-like and insubstantial. Although we are given sketchy backgrounds of almost each one, we know that the ten-minute background interlude is gifted to us each time, exactly before said character either dies (which does not mean that they do not actively appear on-screen any more) or otherwise falls into some misfortune. The characters never evolve, they never develop, and, alive or dead, their reactions are hardly credible or even probable. 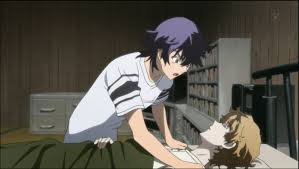 That being said, the art used in Shiki is very pleasing, when portraying kawai characters like Sunako, but totally irritating with bland ones like Kaori – and seriously, what’s with all the stupid bombastic hairstyles? And the BOOBS… Lol. Anyways, the guys are all hot, and I loved Megumi’s fashion sense too ;p 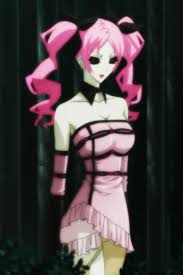 I also loved the fact that in the end, we are so steeped in the lore of the town of Sotoba, that we don’t even see the undead as vampires anymore, but we really and truly perceive them as Shiki. They are blood-thirsty, they are romanticized, but in the end, like their human counterparts, the Shiki just want to live a normal life, they are afraid, they make mistakes, they need help – but no one helps them. The (hot) priest Seishin perfectly persnonalizes the troublesome issue everyone in the village, not to mention we the viewers, feel – the Shiki are parents, friends, husbands, sisters, mothers, loved ones who are just trying to survive – is killing them murder, or is it just self-defence? 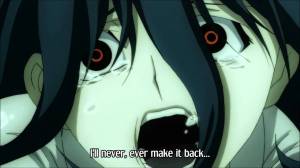 Although the characters leave something to be desired, the issues presented by this anime are quite clear and very deep. In the end, I couldn’t, however, give the anime 4 stars as it still had something lacking, but I would still recommend it. 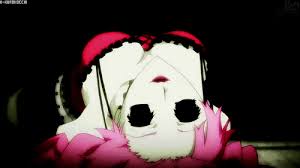 It is so hard to find good psychologically-deep animes these days! Most of them seem to focus on fan-service – boobs, boobs and more boobs. Nonsensical scenes where the protagonist, surrounded by good looking willing females, always seems to end up tripping on something and falling on someone’s BOOBS, grabbing a BOOB by mistake or inadvertently catching sight of one of the female characters in a changing room, and obviously seeing her BOOBS in all their glory. 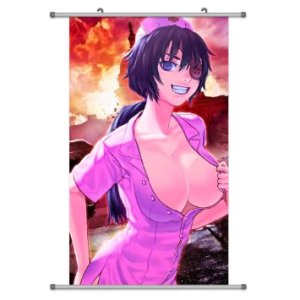 And what about all those lesbically-oriented all-female scenes in bath together? Washing each other’s backs and massaging each others BOOBS and what-not. Does that actually happen in Japan?? 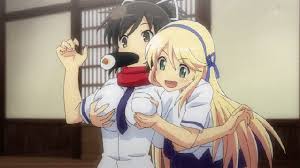 Anyways, as I was saying before, like many animes, I got side-tracked in all the BOOBS, yes finally I found another good anime. After Elfen Lied, after Death Note, after Higurashi: When they Cry, after Another, and Serial Experiments Lain… there came MIRAI NIKKI.

Or Future Diary, as you prefer. 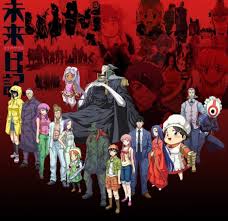 The anime is not overly-long, being made up of 26 episodes and an OVA. *sigh* And that is another thing, some fairly good animes are just TOO LONG. I really TRIED to watch Bleach, and I liked it too. But seriously, 366 episodes?! Please! I hardly made it through Inuyasha, even though I loved it to bits, and that was ‘just’ 167 episodes! 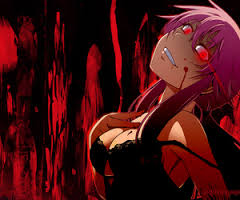 Anyways, Mirai Nikki has a fairly interesting plot. God is dying and he needs a successor. He chooses a number of people and gives them Future Diaries which predict the future. Thrown into an insane game of life and death, the contestants must kill each other, in order to become the new God. The twist in the plot is that each diary is different and unique, so each contestant needs to understand the abilities pertaining to the other diaries, before s/he can combat and defeat its owner. 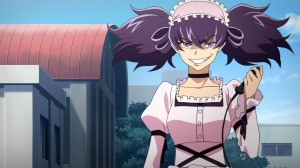 I don’t wish to give any spoilers, suffice it to say that we not only get to meet many diverse and mostly insane characters, and made to understand their psychology and perspective, but we also get to face some of life’s most difficult choices and problems too. Issues like child abuse, betrayal, love, relationships, friendship, and self-esteem. 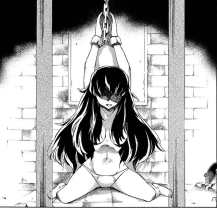 A couple of years ago I started to buy those animes which I deemed ‘worthy’ to be in my collection, in blue-ray. Up to now I have Elfen Lied, Full Metal Alchemist, Death Note and Another. I could not buy Higurashi, as its second season was never released in DVD *sob*. I wonder… shall I buy ‘Mirai Nikki’ too? I’m half-way through it right now. I guess I’ll decide when I’ve finished it. 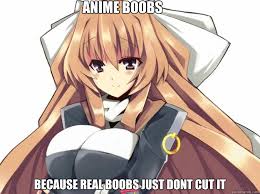 P.S There are a lot of BOOBS in Marai Nikki too anyways ;p 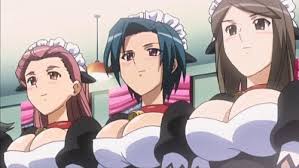