Everyone doubts himself at some point or other. No one thinks he’s perfect or that he’s right all the time. It is a fact of life – we are uncertain, we are confused, we are not sure. Maybe we cannot see the situation clearly, maybe we are shy in certain contexts, or maybe we just haven’t found our real priorities yet.

It is however, astounding to see how many people transform these doubts and confusion into envy towards others. How many shift the onus from trying to improve themselves or their situation, into trying to make trouble for, or compete with, others instead. It is one thing to have low self-esteem and own it, quiet another to project your self-hatred and your disillusionment with yourself, onto someone else.

Hating someone else is far easier than hating one’s self. And some find it much easier to shift facts in their favor, in order to be able to look at the mirror without gagging.

Of course, it doesn’t help that most self-deluding narcissists, scientifically also tend to be very good manipulators and have a talent for convincing and influencing weaker individuals. After so much effort and practice convincing themselves that reality is conveniently different from actual facts, how could they not be?

The pimple-faced looser with fake hair color and caked make-up enviously copying other people, the middle aged patronizing know-it-all trying to compensate for his low self-esteem, the entitled unemployed mom spamming social media with photos of yoga-class, the nasty bitch without friends dressing herself up only to take a couple of selfies, then taking off her frills again, the forever alone guy who finally has a girlfriend, yet spends more time bragging about it, rather than getting to know her.

Any of these sound familiar? There are so many of them. All trying to hide their weaknesses, trying to appear different from who they really are in a hypocritical show of strength. The only thing which is crystal clear however, is that they are weak. Scared. Alone. Since, instead of being able to face themselves – their fears, their weaknesses, and the need to communicate, they end up hiding themselves under layers of deceit, rather than admitting that they are not perfect.

As the wise man said: ‘I am the wisest man alive, for I know one thing, and that is that I know nothing.’ (Socrates)

On a personal note – I’ve (unfortunately) known many such people in my life. It is futile to try to change them, or kid yourself that they are worthwhile being with. Keep away from emotional vampires, or those who need to feel that they are competing with you in order to convince themselves they are worth something, rather than be your actual friends. Don’t let others project their own faults on you.

The only thing to do with narcissists, is to keep them well out of your orbit.

Around eleven years ago I fell in love with someone who did not exist. I fell totally headlong and irrevocably. I knew he was just a figment of someone else’s imagination. I knew he never did and never would exist. But I could not help it.

He was far from perfect. Oh gods yes. He was sly, manipulative, a liar and a murderer. He was also a bastard. Literally.

With him, I battled vicious family members, journeyed through hardships and illnesses, came to understand concepts like love, secrecy and death, and also, with him, I grew up.

During the first trilogy he was first a boy, then an adolescent, and then a young man. In the fourth, fifth and sixth books dedicated to his Six Duchies, he was a man in his prime. Full of regrets, failures, moods, and mistakes. And yet, still, I loved him. 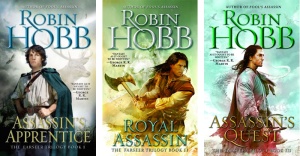 Now, more than a decade later, Ms Hobb has finally continued the story of FitzChivalry Farseer, in the book ‘Fool’s Assassin’, the first of the Fitz and Fool Trilogy, and suddenly I realised that in the end, he is going to die. I did not understand this just because he is getting older, or because it is ‘inevitable’. After all, this is just a fictitious fantasy novel, and for those who read all about it and know what I’m talking about, he could extend his life indefinitely with The Skill, that is, his hereditary family magic.

No – I know that he is going to die, because the focus of the story is shifting. He is not the sole fallible narrator anymore. He has a flawed daughter – a genius, who like him, we cannot but love and be intrigued by. I am enchanted in getting to know her, and she is still 9 years old in this book! And yet, I am heartbroken. Because as an experienced reader, and a writer myself, I know how the story goes. Slowly, my dear Fitz will recede as a main character, and little Bee will take his place, until finally he will tiptoe out of the plot, and of my life, forever. 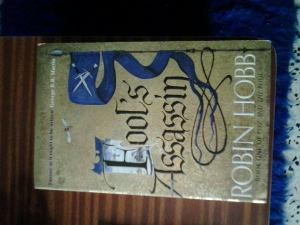 Oh Robin, Robin, why are you doing this to me? Don’t you know that my Fitz had been the foundation of my whole epic fantasy romantic imaginary life? Seriously, it just hit me yesterday, and I’ve been in a daze of depression ever since…

I’m not joking, maybe many think I am, but I am not. I have never found such emotion for someone and I never will, at least the author could have the decency not to kill him off!! Robin you have been my favourite writer ever since I first came across your work, second to none not even at present, and not even to George R R Martin, so WHY, WHY ARE YOU DOING THIS TO ME?