It is a truth universally acknowledged, that one of the great joys of coming back home after visiting another country is taking a look through the photos and videos one has taken, and marveling again at the places one has been to. I usually do this bit by bit as I slowly upload my photos on social media, while savoring each memory of those times for as long as I can (or at least, before the next trip abroad comes along!)

During the last 5 years I have been to Sicily 4 or 5 times, and this Mediterranean island, which is the closest one to the Maltese archipelago, never ceases to amaze me. I admit, part of the fascination is the fact that it is so much like my own Malta… and yet, so different too. In fact I previously wrote an article about it, which mainly focused on the historical ties between the two islands, and which one can read here. However with the positive, unfortunately, one also has to face the negative aspects of each country, and while Malta and Sicily have a lot of amazing things in common, such as their heritage, architecture, art, food, etc, they also have one other thing in common which they could well do without.

I am talking about garbage.

Every country, indeed every place where there is human habitation, generates an amount of garbage. That is normal. The responsible and acceptable thing to do of course, is to take care of this waste and recycle it, or at least dispose of it in some constructive way which does not damage the environment or ourselves.

Unfortunately, that much appreciated lassaize-faire attitude which both the Maltese and the Sicilians have in common, is, I think, the issue from which the waste-related problem stems. The so-called ‘u ijwa‘ (an expression basically meaning ‘I don’t give a damn’) attitude is why people simply don’t care enough to pick up their trash and take it with them whenever they are in the countryside for a picnic for example, or at the beach for a swim. What’s worse, larger junk and discarded appliances, such as BBQs, mattresses, fridges, etc, which in Malta is even picked up free of charge by local councils once or twice a week from the front of one’s own household, is, for some incomprehensible reason, left outside to rust and deteriorate, besmirching our natural habitat, instead.

And this is what I found in Sicily, and as I was looking at which photos to upload in my online album, the issue became even more evident. There were photos in my camera which I discarded, simply because the trash overwhelmed the beauty and nature around it. Why are humans so destructive? No other mammal or indeed, no other animal, is such a parasite on nature as humanity. And that is surely nothing to be proud of. 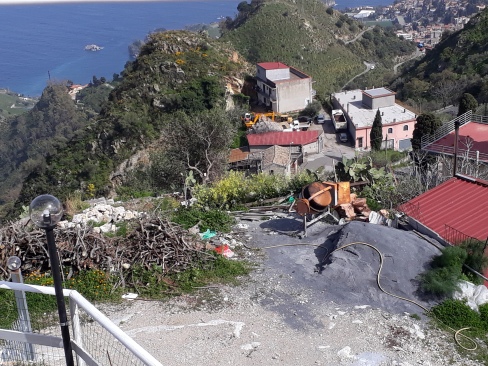 The worse is that these photos are just a pale reflection of what I saw – and here I mean both the beauty of Sicily, and the corrosive trash left lying around it. The only thing I can do, is hope that this ‘u ijwa‘ attitude is slowly eroded out of the population, either through education, or through the consequences of learning that living in one’s own filth, is of detriment both to the mind and the body, and is one of the unhealthiest things one can do. Sounds like common sense doesn’t it? So, how come we have this issue?