My short mini-break ended with a bang – in more ways than one.

First of all, we had planned this day to be the climax of the trip. We had booked a Jeep ride up Mount Etna, and were very fortunate in that, even though generally such a tour caters for 6-8 people, since it was December there wasn’t a high demand at this time of year, and the private tour was just that – private, meaning that we were to be the only two people with the guide!

That was very fortunate considering the fact that in the middle of the night, I had woken up suffering from sciatica. My back was really killing me and I had seriously thought about not going up Mount Etna at all. My condition was so chronic that my whole left side, starting from my lower back down to my left leg, was totally frozen and very painful. I could hardly walk. Which is why being alone with the guide helped a lot, as he could keep a slower pace, while also helping my boyfriend aid me walk.

As you’ve probably realized, even though I was feeling awful, I still went up the mountain! I couldn’t miss such an opportunity which might never come again! 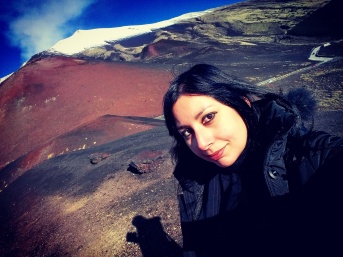 After we met our guide and explained my situation, we started driving up the mountain while we joked, talked, and learned about it’s history and volcanic formation. There have been various eruptions and lava flows, which created a multitude of craters, caves and rock formations over the years all around Mount Etna. In fact, on the way we stopped to admire just such a crater. The red soil, which once had been lava, was truly beautiful. The colors deepened and changed depending on how many years had gone by since the eruption. I did not know this, but the guide told us that even though during the first few years, the earth where lava flowed was arid, afterwards it actually became more fertile than normal and it led to the cultivation of certain plants and trees, which were very special. If, for example, one was to plant fruit trees, these would produce fruits much redder in color than usual, and with a particularly strong flavor and taste. There was quite a market for this kind of produce.

Afterwards, we continued our journey up Mount Etna. I could actually see the fuming craters even from far off, and I was so excited as they kept getting closer and closer! The weather was quite warm and the sun was shining, it was all so amazing and I was really glad I hadn’t cancelled the trip, even though my pain did not abate during it.

At last, we arrived at the visitor’s center which is almost at the top of the Mountain. We stopped and walked around, that is, I tried to walk while leaning on my boyfriend. The panoramic views were more than worth the pain!! I found out that our guide was also quite a spiritual person, in that he believed in the pull of the earth and that certain points of the land are special, which I do too. Mother Earth is truly a force to be reckoned with.

We also went down into a cave which had been naturally formed and excavated with the passage of the lava-flow. There are many like it around the volcano.

Lastly, the guide took us for a short walk on the other side of the mountain, through a dense and beautiful forest that had sprung up in the wake of the oldest eruption. We had to climb up some rough terrain, which was not easy for me without the use of my left leg, however I had the help of two strong burly men (my bf and the guide), so I managed wonderfully. Again, the panoramic views of the other side of the mountain, and the small villages and towns of Sicily which one could admire in the distance, were more than worth it.

In the evening, we went to eat at, I admit, one of the tastier and most delicious places I’ve been to in my life. This was an agritourism – a farm where they served very fresh, traditional and typical food of the region, all of it produced and cultivated by the family who took care of the restaurant themselves!

I am just so in love with Sicilian food! In my opinion it is the best cuisine in the world! And the portions… phew!!!

P.S My sciatica did not get any better by the way. When we got back home, I had to take a week off sick from work and stay in bed for days before I could walk without wincing.