Wow, I came on here to write a bit about what I read this month, and then I realized that the last thing I contributed to my poor wee blog was actually last month’s January’s round-up! Bad, bad Moonsong! *slaps wrist*

Ah well, what with multiple writing commissions I never seem able to catch up with, my day-job which is getting more demanding lately, plus one week of travelling through Southern Germany, you could at least try to understand why right?

Anyways, here I am once again – ready to razzle and dazzle… or at least, to ramble a bit about the books I read this month. Here goes:

I had already read all four books previously some years ago, even before I even knew there was going to be a movie. Lois Lowry is a very good writer, tackling current social issues magnificently couched in fantasy. The four books all have different narrators and different settings, and yet I was impressed by how well they interlocked together in the end. The plot is masterful. I purchased a very beautiful hardbound copy of it and couldn’t resist re-reading it at once!

I love Ruth Rendell but I had steered clear of her Inspector Wexford Mysteries before. This is because I’m not much into investigative books. I got this one from the public library because I was curious and thought I’d give it a go. It wasn’t bad, however it fell short of my expectations as R.R’s psychological stand-alone thrillers are usually really good and always have a twist at the end. This one… well let’s say that even someone who’s not into investigative fiction could see the so-called ‘twist’ half-way through the book… so no surprises at all there. Kind of disappointing really, though very well written of course.

I found a beautiful and very cheap edition at my local store, and was honestly  ashamed to realize that although I’ve devoured Emma, Sense and Sensibility and Pride and Prejudice countless times, I had never actually read Mansfield Park! To be fair, I did not like the characters as much as the ones in Austen’s other novels, and the situations described were not particularly riveting either. No wonder this novel is not as famous as her other works.

I had already read almost all of the Codex of Alera book series last year, however I was missing the last book. Now I’ve bought it, so I obviously need to re-read all the others too in order to refresh my memory, before reading the concluding novel. The first one of the book series was not so great to be honest, not because it was not masterfully written, or because the plot was weak. Not at all it was amazing in that way, however personally I did not like many of the characters much and would have preferred it if the writer had focused only on Tavi, who becomes the main character later on, than equally shift the narrating around.

Continuing the series previously mentioned, the second book focuses mainly on Tavi (finally) and is much more satisfying, hence the 4 stars instead of 3. I look forward to more! 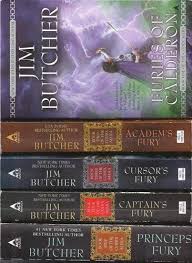