When I had watched Season 5 of American Horror Story last year,I was hardly impressed to say the least.

However, looking at Season 6 this autumn, I guess I’ll just have to eat my words. 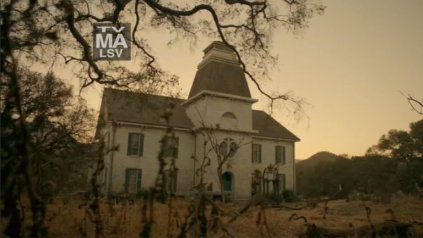 The Season in fact makes reference to the historic mystery of the Roanoke colony, also known as the Lost Colony – a group of Americans who were sent to Roanoke Island in the New World (North America) in the 16th century, during the reign of Queen Elizabeth I, in an attempt to colonise it and establish a base camp. The 115 members of the colony all disappeared without a trace. The only remaining clue was the word ‘Croatoan’ scratched on the bark of a tree.

This season is, in a way, totally different from the previous ones, as all the episodes are presented in the format of a documentary. The narrative focuses on a married couple, who are telling us the story in a studio, while at the same time, people we know to be re-enactors play their parts in order for the viewers to understand what actually happened. Each character is therefore seen twice and portrayed by two different people. The ‘real’ character is interviewed in the filming studio, while the ‘re-enactors’ are the ones playing out the actual events.

The main plot line follows an interracial couple, Matt and Shelby. After being attacked by a street gang, they decide to leave the city and its perils, and relocate to an abandoned colonial farmhouse in North Carolina.

To read the rest of the article, which was published on EVE magazine follow the direct link: http://www.eve.com.mt/2016/11/05/american-horror-story-season-6/