Blair Castle, found near the village of Blair Atholl in Scotland, is located between Perth and Inverness in Highland Pertshire. Being the ancient seat of the Dukes and Earls of Atholl, and strategically located in the Strath of Garry, it holds an important place in Scottish history, both strategically and culturally. Whoever held the Castle was gatekeeper to the Grampian Mountains, and the most direct route to Inverness, which is also the reason why Blair Atholl itself possesses such a colorful history. It is situated at the entrance of Cairgorms National Park and surrounded by a magnificent backdrop of hills and forests. The village of Blair Atholl itself in fact grew up as a means of supplying the Castle, and lies at the confluence of the Rivers Garry and Tilt, 10 miles north-east of Pitlochry. Blair Castle is the focal point of the Atholl Estates, which once covered 350,000 acres, that is, 141,640 hectares of the Scottish Highlands. Currently, the estate lies on 145,000 acres, that is, 58,680 hectares, making it one of the largest in Scotland.

Blair Castle stands on the ancestral home of Clan Murray, as it was historically the seat of their Chief. The first known structure to be built on the site dates at least to the mid-13th century, and the oldest part of the present Castle is known as Comyn’s Tower, which was built in 1269. This was commissioned by John I Comyn, Lord of Badenoch, who wasn’t even the legal owner of the estate at the time. Comyn was in fact a neighbor of the rightful owner, David I Strathbogie, Earl of Atholl, who started building on the Earl’s land while this was away on crusade. When the Earl came back home, he found the interloper building on his land and complained about it to King Alexander III. The Atholls won back their land, evicted the Comyns, and incorporated the tower into their own castle.

In 1322, David II Strathbogie, Earl of Atholl lost his titles and estates after his rebellion against Robert the Bruce. The title was granted to a number of individuals until, in 1457, it was given to Sir John Stewart of Belvenie, King James II’s half-brother, as a reward for fighting against the Douglasses and Macdonalds.

The castle was engulfed in warfare once more in the 17th century during to so-called Wars of the Three Kingdom. At the time, the Murrays supported the Royalists, and this led to the castle being captured by Oliver Cromwell’s forces in 1652. These held possession of it until the monarchy was restored in 1660. In 1676, the restored King Charles II granted the title of Marquess of Atholl to John Murray, 2nd Earl of Atholl as a reward, and the 2nd Marquess was given the title of Duke in 1703 by Queen Anne.

During the subsequent Jacobite uprisings, the Murray family was divided as to its loyalties. In 1746, Lord George Murray, together with a force of Jacobites besieged his ancestral home in an attempt to regain possession of it, however before he could succeed he was ordered to retreat in order to fight elsewhere, at the Battle of Culloden. This was the last siege to take place on British soil. Afterwards, Lord George Murray went into exile and later died in Holland, George Murray, his oldest brother, died as a prisoner in the Tower of London, and James Murray, the 2nd Duke of Atholl, resumed residence of Blair Castle. 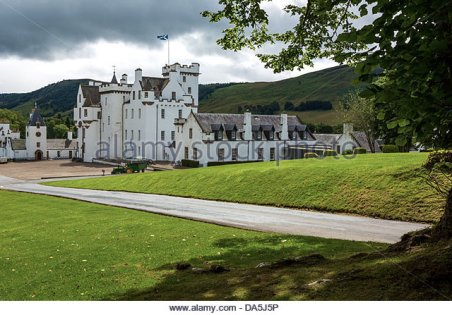 James Murray in fact later inherited the title of King of the Isle of Man via his maternal grandmother. The title came with a huge income and properties, which helped fund his project of transforming the medieval castle of Blair into a grand Georgian mansion, tearing down turrets and castellations, in order to create a more fashionable residence. The 3rd and 4th Dukes also prospered, and the grounds around the Castle too were transformed and improved.

In 1844, Queen Victoria and her consort, Prince Albert, visited Blair Castle and stayed there for three weeks, during which the Queen granted the Duke of Atholl permission for the founding of the Atholl Highlanders as a private army. This is today the only private Army in Europe. During the First World War, Blair Castle was used as a Red Cross hospital. During the Second World War, the Castle was used to house a displaced private school and a number of evacuees from Glasgow. Blair Castle was one of the first private houses in Britain to open its doors to the general public, which it did in 1932. The 11th and current Duke of Atholl visits each year, while the Blair Charitable Trust runs the day to day management of the estate.

Blair Castle is the focal point of a breathtaking historical landscape. Its extensive parklands in the impressive magnificent Highlands are set in a number of walks and trails, and the grounds themselves form part of superb woodlands. There is a deer park and pony trekking center close by, as well as a woodland adventure playground for young children. One can most easily arrive at the Castle through Blair Atholl village. Once one passes the handsome gates, one can use the visitor’s car park to the east of the Castle, from which one can choose to explore either the gardens first, or the visit the castle itself. If one chooses the castle, this is reached by crossing a small pleasant footbridge over the Banvie Burn and walking across a large open area.

The first room one sees as one enters the castle is the 19th century entrance hall. Two storeys high, with wood panelled walls covered by muskets, swords and shields, the Great Hall is truly a picturesque experience. Crossing the main hall, across the vaulted ground floor, the Castle tour continues with a grand total of 30 other rooms. These give a rich and varied impression of Scottish life over seven centuries, and give visitors of the castle the opportunity of understanding not only the way the Dukes and Earls of Atholl lived, but also historic customs and traditions.

One of the most spectacular of the Castle rooms is surely the Tapestry Room, which is hung with Mortlake tapestries, once owned by King Charles I. The Victorian ballroom is also impressive, with its display of 175 pairs of antlers. All the rooms are filled with iconic period furniture and fine art, including a number of Jacobite relics, Masonic items, fine porcelain, and collections of weapon and lace. The present dining room was built during the 18th century.

The six-storey Comyn’s Tower is the oldest known part of the Castle, dating back to 1269, although it was later re-modelled in the 5th century. In 1740, the 2nd Duke transformed the medieval structure into a stylish Georgian home, removing the turrets and applying fashionable Georgian finishings. 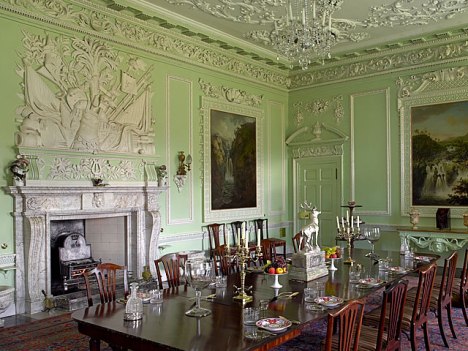 Some of the rooms at Blair Castle are in use today for a number of ceremonies and events. They can be used as conference venues, for private dinners, business functions, corporate meetings, special receptions, and even weddings.

Beyond the Castle itself are its grounds and gardens, which flourish over 145,000 acres, and most of which were laid out in the 18th century. To the north of the castle is Diana’s Grove, home to some of Britain’s oldest and tallest trees, while to the east one can find the famous nine-acre Hercules Garden.

My article on Blair Castle was published on the Polish website castles.today. If you wish to read it in its entirety, please click here.