For the travelling-amateur, Sicily usually consists of Mount Etna, the town of Catania, Palermo, Siracusa, Erice and maybe Taormina. Some even make an effort and throw in Castelmola. All these places are worth visiting (I have been there too and am saying that from personal experience of course), however the secret about Sicily is that the more beautiful, mysterious and historically precious spots are actually not so popular as you might think. Which is, of course, part of their charm.

Having been to Sicily around 4 or 5 times during the past 5 years, I must admit that each time I visit, I fall in love with this island more and more. The more one explores and finds new places, the more one realizes that one has seen nothing yet!

Take my last vacation there for example. There were a number of astonishingly amazing places we visited, but I’m only going to write about one in this post, as there is so much to write and describe about each of them. 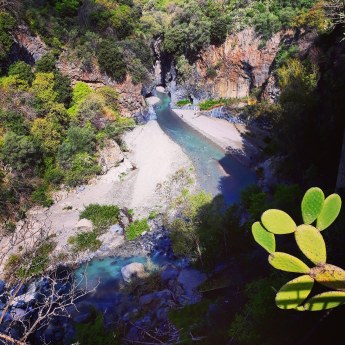 ‘Le Gole dell’Alcantara’, or the Alcantara Gorge, is situated in Alcantara Valley in Western Sicily. This natural canyon holds a jewel of a river, which gurgling and crystal clear, has sculptured and formed the surrounding hill for millions of years. The stone formations present in the gorge itself are indeed natural works of art tailored by mother nature. Coincidentally some time before, I had watched the movie ‘The Shape of Water’, and while the film itself has nothing at all to do with this place, or anywhere like it, I couldn’t help but think that the phrase itself, ‘the shape of water’ described the gorge perfectly, as one could definitely see the paths that the river-water had taken and forged into the rock itself.

The Gole dell’Alcantara are as such not so popular as other ‘touristy’ attractions, even if they ARE set in a very well-managed tourist park full of flowers and plants, an orchard and ‘family-friendly’ facilities. This is kind of perfect for those who wish for some peace and quite, while at the same time don’t want to go somewhere completely without any sign of human habitation.

We visited the Alcantara Park in March, that is, what I call pre-Spring. The weather was perfect, a tiny bit chilly, yet so sunny as to make one want to strip and just fall into the cool welcoming arms of the Alcantara stream. Unfortunately, this is only available for swimming in summer, so it was not possible, yet we were also aware that there would be more people visiting it later on in the year, so we much preferred to bask in its glory before that.

The park itself, apart from the natural wonder that is the Gorge, contains a number of themed and styled gardens, many orange trees, a number of meandering walks with beautiful views, as well as a good canteen and playground for children. You could definitely spend from half a day to a full-day relaxing here. Not to be missed!

By the way, all photos were taken by me, except for the first one which was taken by my one and only. :0)